I’d like to tell you about a certain family of bilipschitz paths in universal covers of graph manifolds with nice “combinatorial” properties that I used here and later here, and that hopefully will turn out to be useful in other contexts as well. I imaginatively called them special paths. You can find a sloppy description of graph manifolds in this post, starting just above the picture reported below (it’s not necessary to read it before reading what follows).

Btw, if you’re fond of mapping class groups, special paths can be thought of as analogues of hierarchy paths.
Universal covers of (flip) graph manifolds decompose into blocks consisting of the product of a fattened tree (see picture below) and

I’ll refer to those blocks as geometric components, and I’ll call walls the connected component of their boundary, which are copies of

metric on the universal cover of a given (flip) graph manifold so that geometric components and walls are convex, walls are isometric to

and other nice properties.
Consider two walls adjacent to the same  geometric component. The geodesics of minimal length connecting them form a strip: 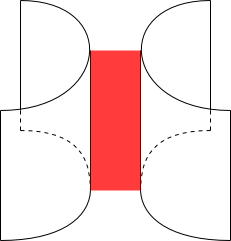 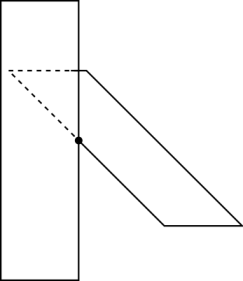 If you’re trying to get efficiently from one point to another, it’s a good idea to go as straight as possible, something like the path below seems to be doing just this. Due to my poor drawing skills, I suggest you to close your eyes and try to form your own three-dimensional version of the picture below, starting from the one above.

Indeed, the picture represents a special path, and special paths are bilipschitz (with uniform constant).
Digression: it’s not unlikely that somebody else used them already, as they seem so natural, but I couldn’t find a reference… Please let me know if you find one!

You can connect any pair of points with a special path, but the feature I was mostly interested in is the following.  Consider the special path connecting points in geometric components corresponding to far away vertices in the Bass-Serre tree.

Then you can show that the “central part” of the special path does not depend on the endpoints, where the central part is made of those points projecting on the Bass-Serre tree far away from both the red and the blue dot.
If you know what an asymptotic cone is, it’s not hard to believe that this gives you a way to determine whether two points in an asymptotic cone are separated by a cut-point in terms of their distance in the Bass-Serre tree (well, the distance in the Bass-Serre tree of points arbitrarily close to the given ones, due to merely technical reasons).
Indeed, I was interested in describing the asymptotic cones of graph manifold groups, as this was the only case left, in view of geometrization, to determine a description of all asymptotic cones of 3-manifold groups. But I will talk about this in another post…

This entry was posted in special paths in graph manifolds. Bookmark the permalink.