This post contains an experimental exposition of asymptotic cones, I hope this will be vaguely understandable (feedback is warmly welcome!). Many (most?) researchers actually think of asymptotic cones in a way similar to the one I’ll present, rather than as limits of metric spaces. The orthodox approach is presented, for example, in this survey.

So, the idea behind asymptotic cones is that you want to start from a metric space

and construct another one which encodes the large scale structure of

. In order to do so, you would like to rescale the metric by some “infinite number”

, so that all the non-large-scale features of your metric space become “infinitesimally small” and can be disregarded. You can’t do this directly in

.
So, the first step is to create a “larger version” of

. Formally, this object is the set of sequences with values in

has a “metric”, which we still denote by

(the distance between 2 sequences is just the sequence of the distances, just forget about this). It makes sense to call

has the structure of an ordered abelian group, and this is what you need to formulate the defining properties of a distance.

contains a copy of

you have a small “cloud” made of the sequences tending to

(up to the equivalence relation), the infinitesimals. On the sides of

you have sequences tending to

, that you think of positive and negative infinite numbers.  Here is a picture of

is a larger version of

because of the following fact. Whenever you have an object or a family of objects in

, you also have the corresponding object or family in

. This is how it works in a specific case. Suppose that

are actually (represented by) sequences of points in

. Each of those pairs of points is connected by a geodesic, and one can consider the subset of

of those sequences whose n-th element belongs to the n-th geodesic. It makes a lot of sense to regard this subset as a geodesic from

, the only difference being that it is parametrized by an interval in

.
Also, most structures you may have on

carry through, in some form, to

, for example group operations, distances, orders…
So, you should think of

as objects with pretty much the same properties.

Some examples of these “larger versions”. Well, we already saw

as depicted above. Another example, consider this metric space:

Its larger version is just two copies of

, intersecting at a single point. Final example: the larger version of

is the product of two copies of

. (Once again, you have the “same” operations, sum and multiplication, in

And now, back to asymptotic cones.  In order to see just the large scale structure of

one needs to rescale the metric so that far away points become close, and points that were close become so close that they can be identified. We can’t do this in

, so we look at its larger version

dividing it by some infinite value of

. It’s not quite true that we can do this for the whole of

, if we want to obtain a metric space, so we have to choose a reasonably sized subspace of

. This subspace is, for some choice of basepoint

(an positive infinite number from

), the subspace of the elements at distance comparable with

. This set is represented by the red circle below (it may or may not contain

), and it turns out that what you get is in a natural way a metric space.

So, to sum up: you start with a metric space

, you take this large version of it called

and you can turn certain large subspaces of it into metric spaces, the asymptotic cones, rescaling the metric by some infinite number.

It’s time for some standard examples, within the context of groups. Take

. When you rescale the metric the “holes” become infinitesimally small, so that all its asymptotic cones are (bilipschitz homeomorphic to) 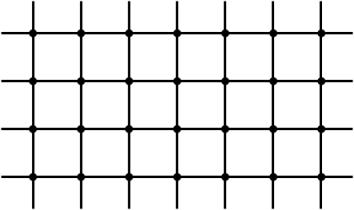 Take now a hyperbolic group. After rescaling the metric you get that any point on a side of a geodesic triangle is infinitesimally close to the union of the other sides, and hence all geodesic triangles in the asymptotic cones are tripods and so such asymptotic cones are real trees. If your hyperbolic group is non-elementary, then those trees branch everywhere… yeah, it’s quite a mess…

Ok, so: what are asymptotic cones good for? Here is my favourite way of using them. Quasi-isometries induce (bilipschitz) homeomorphisms between corresponding asymptotic cones of the domain and the codomain. This is because when rescaling the metric the error terms of the quasi-isometry become infinitesimal (and a similar argument gives surjectivity). In particular this allows you to use topological tools, say homology, to study quasi-isometries, and so in particular automorphisms of groups. Here is an example, due to Kleiner and Leeb, I’ll give you other examples next week. Start with a self quasi-isometry of

. Taking asymptotic cones, you have a self homeomorphism of the product of two trees that branch everywhere (asymptotic cones preserve products). You can study such a homeomorphism, and what you find out is that it preserves the product structure. In turn, this gives that the quasi-isometry you started with coarsely preserves the product structure. (Indeed, Kleiner and Leeb proved something way more general than this, and they use this as an example, you can find it at the end of their paper.)

Asymptotic cones have also been used to study self quasi-isometries of mapping class groups, and in many other examples.

Finally, I guess I have to justify my unorthodox choice. The usual way of presenting asymptotic cones involves considering a sequence of positive real numbers and defining the asymptotic cone as a limit of the metric spaces obtained rescaling the metric by the elements of such sequence. We avoided talking about sequences and replaced all sequences with a single object encoding it. Ok, it might not look like a big difference, but when when dealing with asymptotic cones you typically have a lot of sequences of  lots of different objects: numbers, geodesics, maps, etc. It’s very convenient, easier to visualize and it makes the notation more compact to replace every sequence with a single object. This is why many people who work with asymptotic cones use, very often implicitly, this point of view.

But there are more substantial advantages: if you adopt this point of view you can use certain tools from logic that really help in many circumstances. I’ll tell you about this in another post, where I’ll also expose some examples of these tools being used behind the reader’s back.

This entry was posted in asymptotic cones. Bookmark the permalink.