Tree-graded spaces have been defined by Cornelia Druţu and Mark Sapir [DS]. They provide models for the coarse geometry of relatively hyperbolic groups, see example 2) below, but I’ll get back on this in some other post.
I’ll assume that the reader is familiar with (real) trees. If not, here’s a picture: 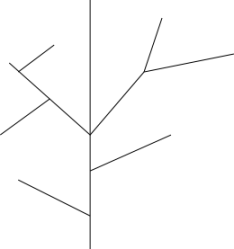 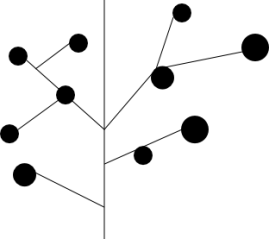 Ok, what does this actually mean? A tree-graded space is a geodesic metric space with a specified family of closed geodesic subsets (the “apples”), called pieces. Distinct pieces intersect in at most one point, and each simple loop is contained in a piece.
As it turns out (formal statements are in Section 2, [DS]) tree-graded spaces are kind of built up in the following way (kind of because the situation is more complicated than what I’m about to describe, but what follows is definitely useful for the intuition). Start with a piece:

Then you attach trees to some of the points of the piece:

1) Cayley graphs of  groups of the form

. These are tree-graded with respect to the left cosets of

3) recall that a cut-point

is, say, a geodesic metric space, is a point such that

has more than one path-connected component. If the geodesic metric space

has a cut point, then the collection of all maximal connected subspaces without cut-points of

is a tree-graded structure. This gives us the examples below.

), many fundamental groups of graphs of groups, right-angled Artin groups that are not products,

),… However, the tree-graded structure is more complicated than in 2).

Finally, just an example of how tree-graded spaces can be used.

doesn’t have cut points and

is tree-graded then any injective continuous map

has the property that

is contained in a piece.

cannot contain, say, points contained in disjoint pieces.
One can use this lemma to show that automorphisms of a group hyperbolic relative to, say, copies of

, whose peripheral subgroups are the free factors). In order to prove this, recall that an automorphism induces a quasi-isometry of the Cayley graph, and taking asymptotic cones one turns this quasi-isometry into a bilipschitz homeomorphism. Using the lemma, one sees that such homeomorphism preserves the pieces, and it turns out that this can be used to show that peripheral subgroups are preserved up to conjugacy. For the details, see once again [DS].

This entry was posted in Brief Introduction (BI), Tree-graded spaces and tagged tree-graded. Bookmark the permalink.